Just two years ago, the Covid-19 pandemic shook the world, forcing businesses around the world to embrace remote working. Many companies have even made this decision a permanent feature of their business model.

However, changes in Informatique infrastructure induced by remote working, such as the shift to cloud solutions, has also shifted the focus of cyberattacks.

According to data presented by the AtlasVPN team, based on the Cyber ​​Readiness Report 2022 by Hiscoxcloud servers are now the main entry point for cyberattacks, with 41% of companies reporting it as the first point of entry, a 10% increase from the previous year.

The first vector of cyberattacks in 2021, company owned servers, now sits third in the list. According to the 2022 survey results, 37% of businesses reported them as the primary method of entry for cyberattacks.

Meanwhile, the second place belongs to the professional emails. They were named as the primary access point for attackers by 40% of organizations.

Nearly half of businesses have suffered cyberattacks in the past year

As the pandemic has driven a shift in organizations’ IT infrastructure, such as the wider adoption of cloud solutions, enterprise security strategies have lagged behind new technologies.

In total, 48% of companies said they had suffered at least one cyberattack in the past 12 months. Even with cybersecurity spending 60% higher, cyberattacks were up 5% year over year.

The Netherlands are followed by France, where 52% of organizations have experienced cyberattacks in the last 12 months. Cyberattacks targeting French companies increased by 3% compared to 2021.

Then come the organizations of Spain. Spain is the only country studied where cyberattacks have decreased compared to the previous year. Cyberattacks targeting Spanish companies fell by 2%, from 53% in 2011 to 51% in 2022.

Meanwhile, 49% of companies in Ireland faced cyberattacks in the last 12 months, followed by the United States with 47%. The number of cyberattacks there increased by 10% and 7%, respectively. 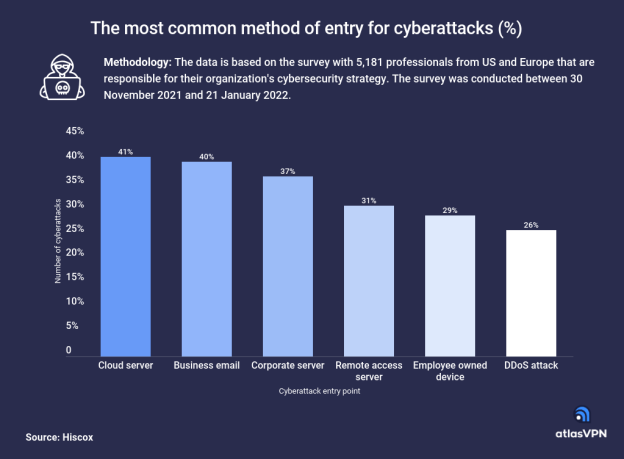