Early Entry is now available at Disney California Adventure for guests staying at Disneyland Resort hotels, and we had a chance to check it out. This photo story offers a step-by-step look at what we accomplished at DCA during the morning Extra Magic Hour replacement and when the park opened, tips and tricks, and more.

We stayed at the Grand Californian for this visit, which is by far our favorite hotel at Disneyland Resort. It’s also usually the most expensive of the three – and none of them are cheap. From our perspective, it offers slightly better value for money than Disneyland Hotel and significantly better than Paradise Pier Hotel, the latter of which is surpassed by a few dozen off-site hotels.

Disney California Adventure currently opens at 8 a.m., which means early admission begins at 7:30 a.m. Unlike Walt Disney World, the three on-site hotels are located within walking distance of Disneyland and Disney California Adventure. As such, there is nothing to discuss when it comes to transportation or parking for Early Entry. However, there is a question of strategy here…

Grand Californian offers private entry into DCA. Proximity to the park is actually one of the hotel’s biggest selling points, which is normally very convenient. GCH guests can enter or exit Disney California Adventure through Grizzly Peak, which is normally much faster than going through the main entrance.

The problem with this approach, at least the day we did the early entry at DCA, was that the bag check opened at the same time as the turnstiles, about 2 minutes before the early entry started. Disneyland Resort still doesn’t have the contactless bag scanners, so it was a cumbersome process. Even being towards the front of the line, we weren’t inside the park until shortly after 7:30.

This process may change over time, but our recommendation at this time is to take the longer route and enter Disney California Adventure through the main entrance, even if you are staying at the Grand Californian. 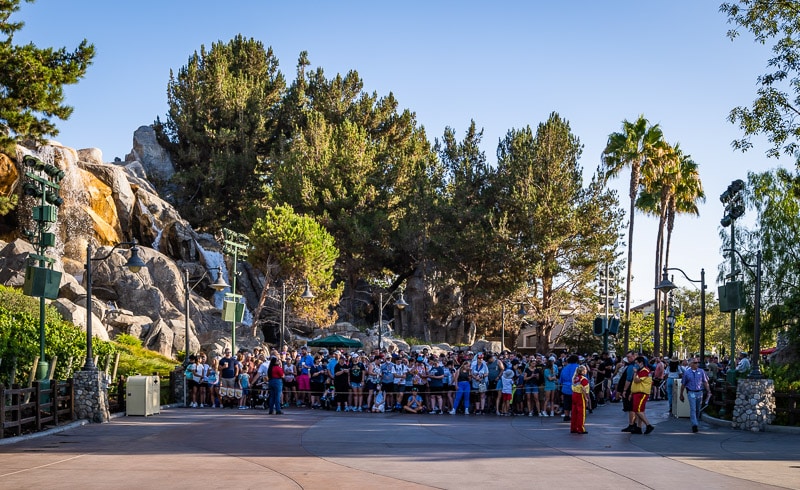 Once inside the park, we had already passed the rope drop checkpoints. This meant we had full access to DCA and didn’t need to show our room key or view the hotel reservation in the Disneyland app.

Even if we had to, it’s a quick and painless process, which only takes a few moments. Once you’re checked in at one of these checkpoints, you’re good to go for the morning – room keys aren’t checked at each individual attraction. 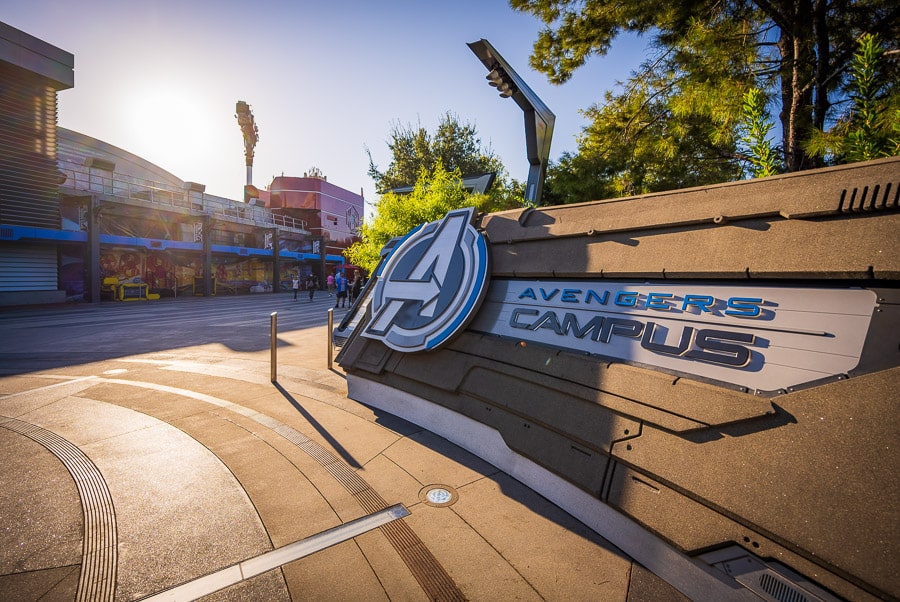 Our plan was to take a divide and conquer approach, with Sarah starting with WEB SLINGERS: A Spider-Man Adventure while I started with Guardians of the Galaxy – Mission BREAKOUT! (I’ll report on my morning in an upcoming DCA rope drop post.)

If you’re wondering why none of us started at Radiator Springs Racers, it’s because the Cars Land e-ticket isn’t open during early entry. Our plan was to drop him after knocking out a few other headliners. 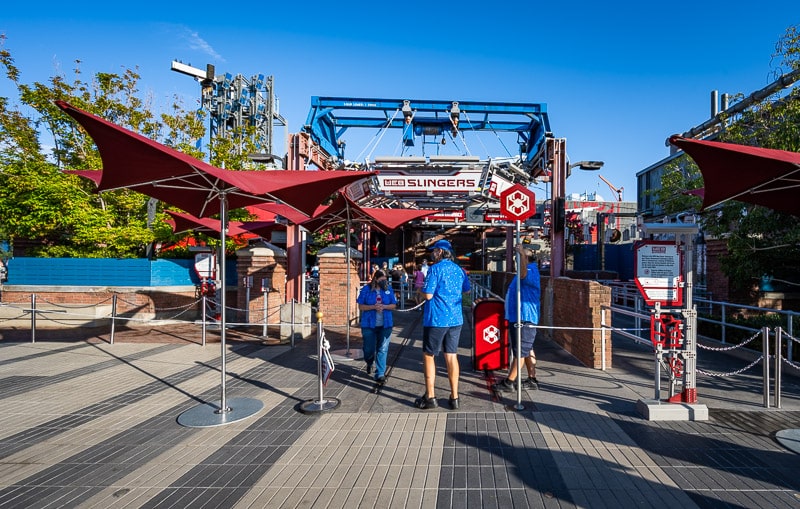 Sarah was online for Web Slingers at 7:35 a.m., in the pre-show at 7:37 a.m., and in one of the very first transport vehicles sent to battle the Spider-Bots.

She left the attraction at 7:46 am, having achieved one of the best scores of the day! Wow!!! 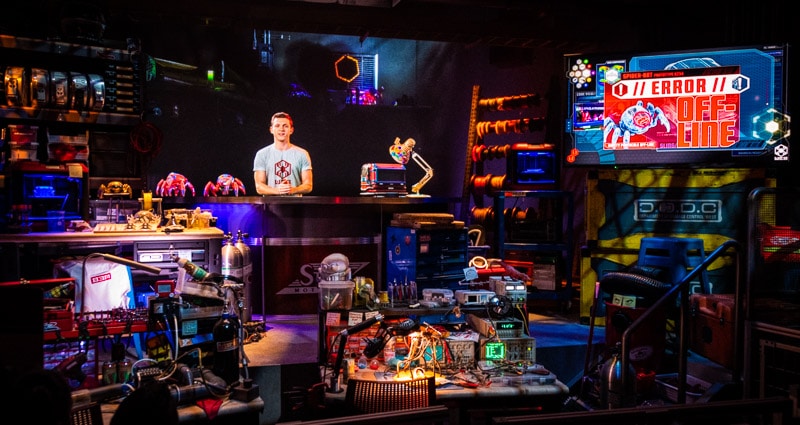 Sarah immediately lined up for the second round of Web Slingers and was in the pre-show at 7:49.

This is where we started to run into problems, as Web Slingers briefly crashed. That’s actually not the only problem we had. Several the headliners were down that morning during the early entry and rope drop. It’s not entirely uncommon, but really throws a wrench into things at DCA where the main attractions are scattered throughout the park. 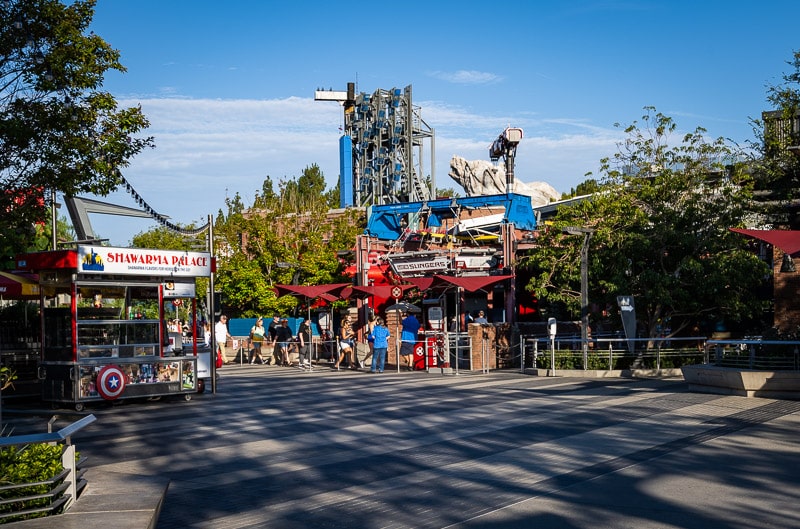 The downtime was relatively brief and she was on Web Slingers at 7:58. Sarah scored high again and another rider reportedly told her she had “the fastest arms in the West!” ” Double wow!!!

The problem here is that the brief downtime caused her to end Web Slingers just after 8am which meant no ropes dropping Radiator Springs Racers. It wasn’t a problem that morning, as RSR was one of the headliners that was down. 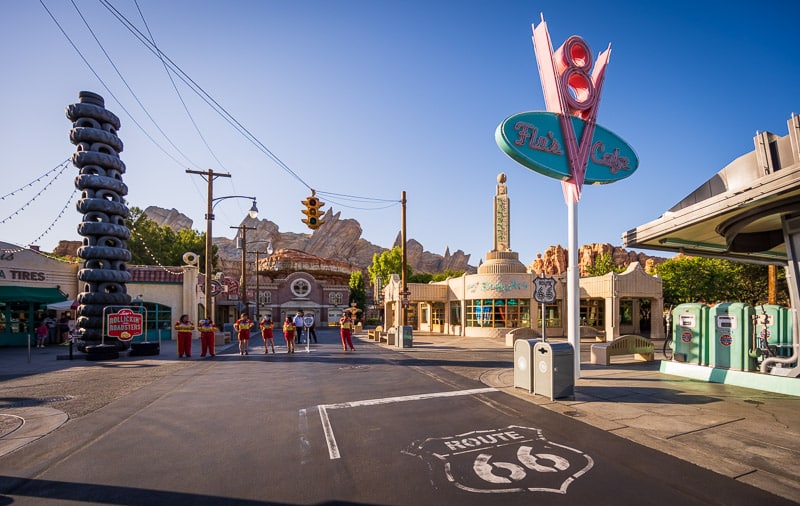 On the plus side, we’ve learned that it’s theoretically possible to do Web Slingers: A Spider-Man Adventure twice during Early Entry and still be ahead of the pack in taking down Radiator Springs Racers.

This is a great way to get three rides on individual Lightning Lanes attractions without waiting, assuming there are no ride stops, downtime, or other issues. An alternate approach would have been to eliminate the two Avengers Campus eTickets or do Guardians of the Galaxy: Mission Breakout after round two on Web Slingers. As a game of pure efficiency it would have made more sense, but Sarah can’t do Mission Breakout. 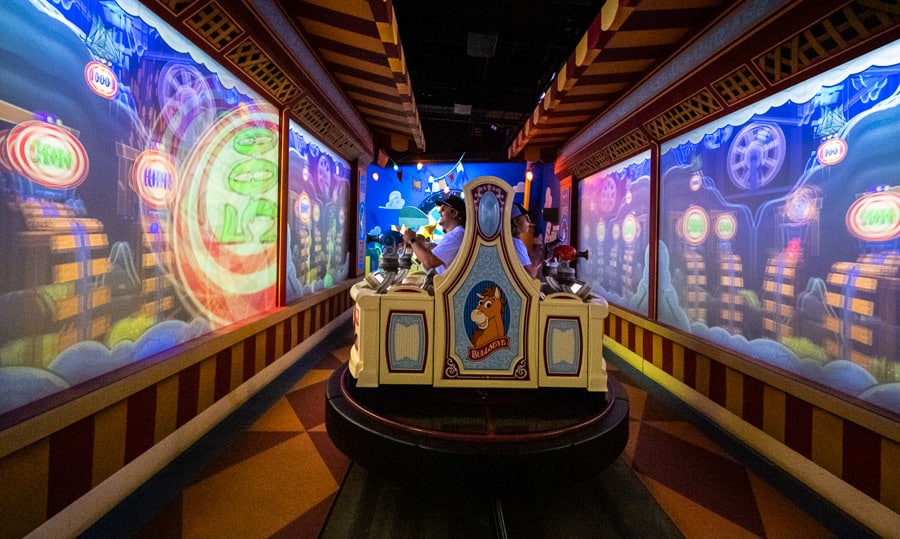 This actual wait time of around 21 minutes is probably not indicative of a normal morning. The fall of three other headliners drove many more people to Pixar Pier than would normally prioritize that part of the park. 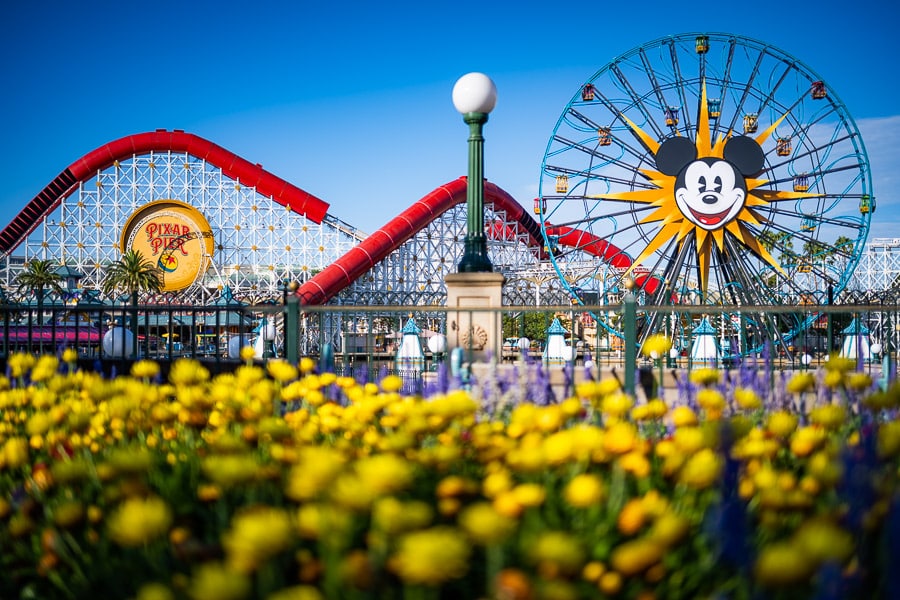 Mickey’s fun wheel (or whatever they call it now) was next; Sarah was in line for it at 8:41 and on the ride at 8:47. No high score here, but she made some new friends. Maybe the real high score is the friends we made along the way?

The rest of his morning is not worth reporting because of all the attractions with downtime. We found ourselves to start doing Genie+ attractions around 9:30am, which is about the ideal approach to booking Lightning Lanes. 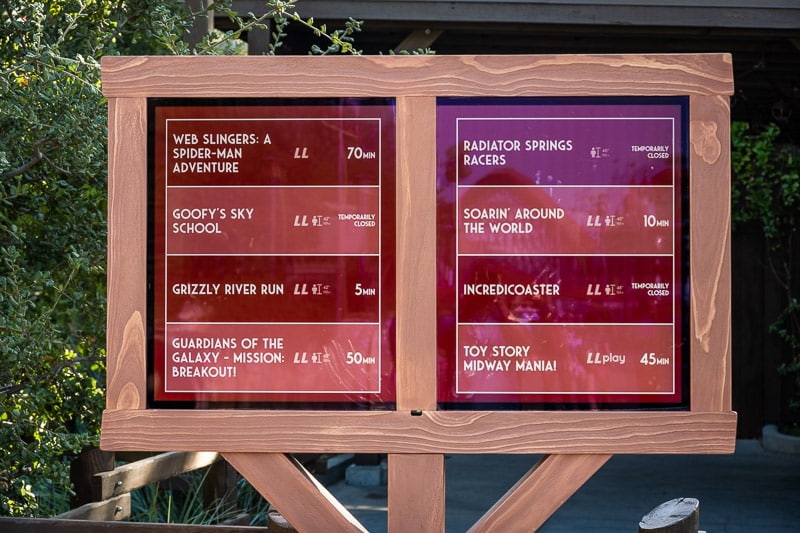 Speaking of which, Early Entry customers who purchase Genie+ are eligible to reserve their first Lightning Lane selection as soon as they enter the park. Don’t.

Your return time will, without a doubt, be from 8:00 to 9:00. Even the end of this window is too early to start using Lightning Lane – you want to eliminate idle rides until (at least) 9:30am. Again, Genie+ is much more laid back at Disneyland Resort than at Walt Disney World. See our Genie+ Guide to Disneyland and DCA for more information, recommendations, etc. 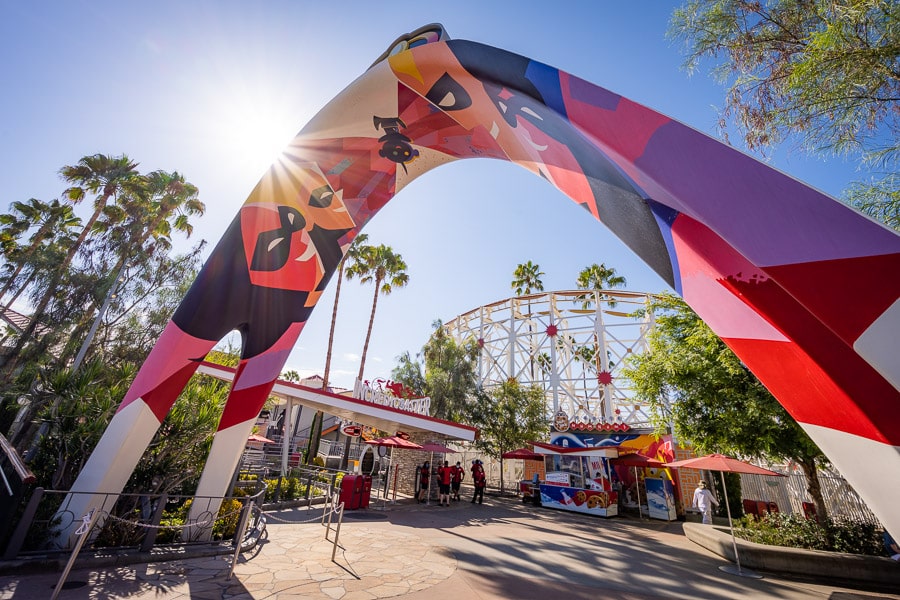 Ultimately, early entry to Disney California Adventure is a solid on-site perk that allows guests to complete multiple individual Lightning Lane attractions in a very short amount of time. From our perspective, early entry isn’t as useful as it is at Disneyland, where you can easily knock out all of Fantasyland just by walking.

However, you might disagree if your group is older and you would otherwise buy individual Lightning Lanes. The perk has a notional value of $14 to $36 per person based on that – potentially more if you also include the boot value on Radiator Springs Racers. We wouldn’t rate it at that, but then again, we never bought a single ILL at Disneyland Resort. (Single Rider line, for the win!) 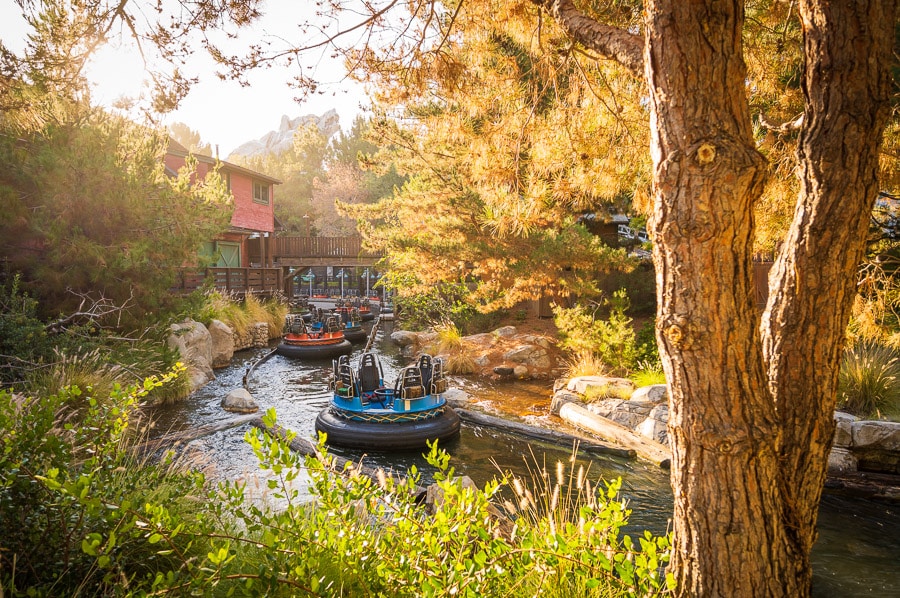 From my perspective, the real benefit of Early Entry – and this applies everywhere – is having access to the park while waking up for the day. Walking through Grizzly Peak, hearing the birds chirping and background music as the morning light glistens through the trees, walking Route 66 without anyone else… even seeing Avengers Campus before the crowds makes it totally chaotic. To each their own, but this is my favorite part of the benefit.

Sarah’s favorite item from Early Entry to Disney California Adventure was in the record books at Web Slingers (x2) and Toy Story Midway Mania. The fastest weapons in the West, indeed. 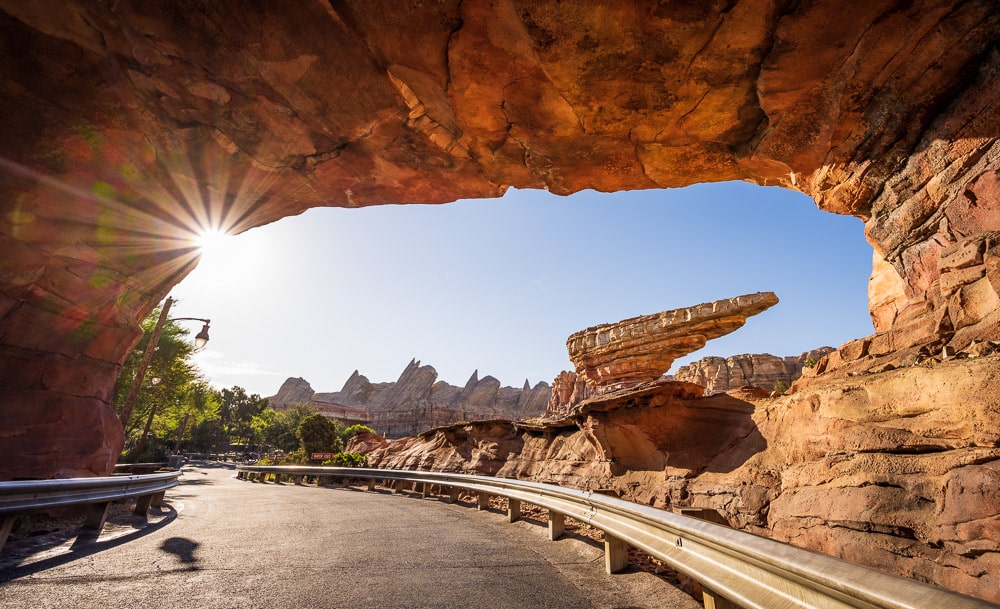 For more information on this on-site customer benefit, see our Early Entry Guide to Disneyland and DCA.

As always, we recommend book a hotel + ticket vacation package through Get Away Today. Whether you choose to stay onsite to take advantage of early entry or offsite for lower prices, the Get Away Today package price will save you money. In addition to their discounted vacation packages, some hotels offer “4th night free” promotions (we very recommend checking out these options) and you can save an additional $10 by using code TOURIST at checkout.

Planning a Southern California vacation? For park admission deals, read Tips to Save Money on Disneyland Tickets. Learn more about onsite and offsite hotels in our Anaheim hotel reviews and ratings. To find out where to eat, check out our Disneyland restaurant reviews. For unique ideas of things that will enhance your trip, check out What to Pack for Disney. For full advice see our Disneyland Vacation Planning Guide. Finally, for the guides beyond disneycheck out our Trails in Southern California for day trips to Los Angeles, Laguna Beach and tons of other places!

What do you think of early entry to Disney California Adventure? Would you book a night or two at the Grand Californian Hotel, Disneyland Hotel and Paradise Pier Hotel to access this benefit on site? Excited to take advantage of this early start to knock out Avengers Campus and get a head start on the crowds of Cars Land, or will you stick to the regular rope drop at Radiator Springs Racers? Disappointed with eligibility rules or attraction queues? Do you agree or disagree with our assessment? Questions we can help you answer? Hearing your feedback – even when you disagree with us – is both interesting for us and helpful for other readers, so share your thoughts below in the comments!